Thank you once again to Missy Timmins for providing us with our Session report and for all of her hard work on our behalf.  This session begins its 60 days (if it stays on track) today.  Similar to previous years, thousands of bills are filed with only hundreds passing to become law.  In 2019, one of the lowest passage rate years yet, some 200 bills made it to law.  This year we have a bunch of things on our radar and tracking list as seen in the attached report.

You know and have heard it before, each session has its own identity.  This one will likely have a lot of election issues spinning around it so keep your eyes open for strategies related to that.  As a matter of fact, the State has proposed $6.2 million for election funding that will help keep all 67 counties up to par in areas like cyber security.  Don’t forget Amendment 4 (Felon voting rights) didn’t get finished and judges ruled some things as late as this past October.  Water quality is always a high priority and you will see that in our tracking but just know that algae and red tide are going to be on the topic lists.  One that is late to the game is E-Verify which Governor Desantis would like to see employers using to verify employment eligibility.  Gun bills are all the rage again, too, with probably a dozen or so filed already including many that are the opposite of others.  If you want to see the entire list of bills click here https://www.flsenate.gov/Session/Bills/2020 .

As many of you know there were some changes at FDACS this year.  Bureau Chief Sarah Oglesby and Assistant Division Director Davis Daiker are no longer with DACS.  Assistant Chief Tamara James took over for Sarah in interim and a new person is moving to that seat now from another Division.  Courtney Frazier, formerly DACS Legal Counsel, is now Assistant Division Director to AES Director Kelly Friend.  We welcome the new folks in to their new jobs respectively and say good bye to Sarah and Davis who have moved on to new jobs in the private sector.

As far as we know, this year won’t be fireworks and bombshells for our industry.  We are keeping close tabs and working with DACS on issues pertaining to us.  We have plenty to watch and plenty to work on through our usual channels.  We will keep you apprised and if something pops up, be ready for us to call you in for the effort.

I hope to see you all in a few weeks at the FPMA Expo in Orlando!

Thank you once again to Missy Timmins for the report and for the efforts in Tallahassee on our behalf.  Please see the report and some stuff below we are watching.

SB 712 - Water Quality Improvements - 2020
General Bill by Mayfield CoSponsors: Harrell  CS Sponsors: Community Affairs
Water Quality Improvements; Citing this act as the “Clean Waterways Act”; requiring the Department Health to provide a specified report to the Governor and the Legislature by a specified date; transferring the Onsite Sewage Program within the Department of Health to the Department of Environmental Protection by a type two transfer by a specified date; creating an onsite sewage treatment and disposal systems technical advisory committee within the department; requiring the department to adopt rules relating to the underground pipes of wastewater collection systems; requiring basin management action plans for nutrient total maximum daily loads to include wastewater treatment and onsite sewage treatment and disposal system remediation plans that meet certain requirements, etc. Effective Date: Except as otherwise expressly provided in this act shall take effect July 1, 2020.

We are past the halfway point officially.  That doesn’t mean anything other than it can heat up quickly from here.  We have seen some games played with strike-all amendments and substitutes and there are plenty of opportunities to do more of that.  Missy Timmins is doing a phenomenal job for us and keeping us in a good position should we need to bark loud.  So far, so good for FPMA members!  As of right now, we have no reason to assemble in Tallahassee for any big issues so I think we are doing ok.

As Missy has said several million times, each session has its own personality (and filled with personalities!) and this session is no exception.  There is the usual infighting and fights along party lines as well as the drama of the day.  We seem to have such a problem just spending 60 days doing the work of the people, don’t we?  Missy has put together another great report to catch the highlights and I wanted to share a few other things Missy, Suzanne and I have been following along the way.

Occupational licensing reform is making its way through stops now along with a few other deregulation packages for business.  What has gained traction is the Governor’s call for uniformity in licensing and creating a predictable business environment.  The Senate has basically removed local licensing from the fold for all 410 municipalities in Florida.  It does not affect state licensing and does not at this point affect your pest control licensing.  We are watching closely anyway because there is still time for amendments and they may be impacting. The other deregulation packages include one that would review so many occupational licenses each year to determine if licenses are really needed to protect the welfare, health, and safety of Floridians.  We, of course, have kept FPMA in front and will always protect our licensing.  The good news is that we aren’t sure this will remain the way it started.  We are watching and honestly not too worried since we are definitely in need of regulation and licensing!

We are watching the struggles develop between the Commissioner’s office and the legislature.  It would appear that Commissioner Fried has more than one battle going with the legislature and it will probably last to the end.  She has funding tied up now because of her gas pump stickers with her face on them, she has the Department of Energy being cut from her control and she has the issue with gun permits and medical marijuana cards in the background.  On another note, the positions that were vacated earlier in AES have been filled and we have already been working with Assistant Director Courtney Frazier.  We are certain the fight will continue in the legislature but at this point, it has not directly affected AES with the exception of seeing some parts of the DACS bill stripped away (Chapter 487 Raw Ag Commodity Fumigation language).  We will continue to support the Department and work with our AES friends.

In a more general business front, E-Verify is making everyone look stupid.  In my humble opinion, the State needs to let Federal deal with Federal.  I am not sure what this rush was to pursue E-Verify as a mandate to all employee hires, especially in a state that has so much verified immigrant labor in agriculture sectors, hospitality sectors, landscaping, construction and more.  The House has lost its mind if it thinks this is a good idea (in my opinion) and at least the Senate has allowed the option of E-Verify or traditional I9 document lists.  Even as I write this paragraph, a Committee Substitute has been filed that changes the bill again, expanding further into the private sector and completely including anyone in the public sector (contracting included) as well as including the entire ag industry.  This is going to be a show.  Keeping our eyes peeled!

Missy has also been helping us help IFAS!  See the reports from Mary Ann Hooks attached to see where the funding sits.

By the way, the only thing these elected officials must do by Law is the budget.  And the budget is getting close.  The Legislature will debate the key stuff in the $92 million state budget.  Looks like teachers will get a raise, but probably not bonuses and state workers at lower level paying jobs will see a raise of some sort.  Everglades, water quality and projects that address algae blooms will get funded more than $625 million and Florida Forever land preservation programs get only about $20 million of the $100 million the Governor requested and far below the $300 million traditionally marked.  It seems that the Florida Forever money was shifted to cover the other issues with water quality being the priority.

On the Federal level, the war wages on against neonicotinoid pesticides.  FPMA is working with other stakeholders and will keep you apprised.  If you are knowledgeable on responding to the EPA here is the link:  https://www.federalregister.gov/documents/2020/02/03/2020-01995/pesticide-registration-review-proposed-interim-decisions-for-several-neonicotinoid-pesticides-notice

But that might be a longer fight than we think.  President Trump just proposed a $6.7B reduction in EPA funding for FY2021.  That follows previous reductions.  EPA is having a hard time being years late to deadlines already as witnessed in our industry’s re-registration eligibility determinations.  It should be interesting to see how this influences other things.

There is always something on the federal level but I will leave that stuff alone for now.  I appreciate your support!!  Thank you all and have a good day!!! 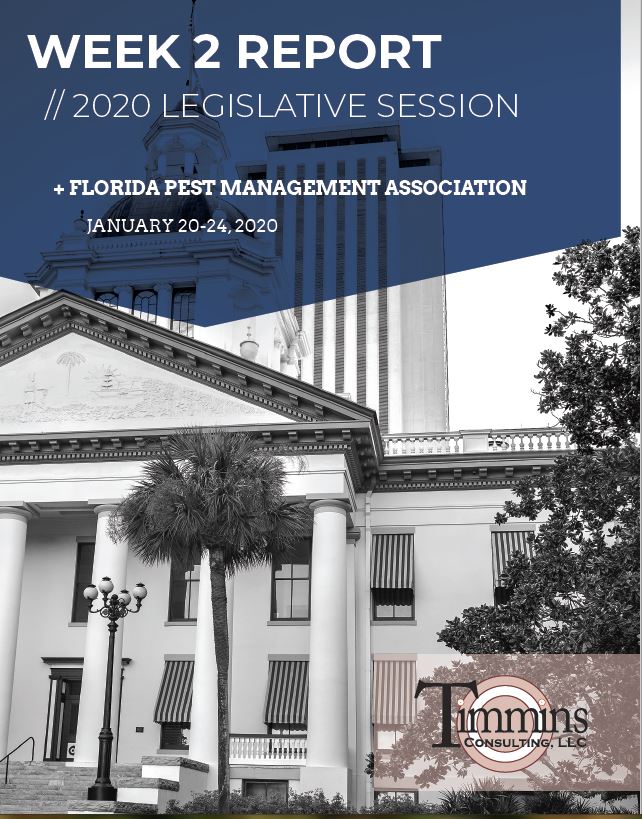 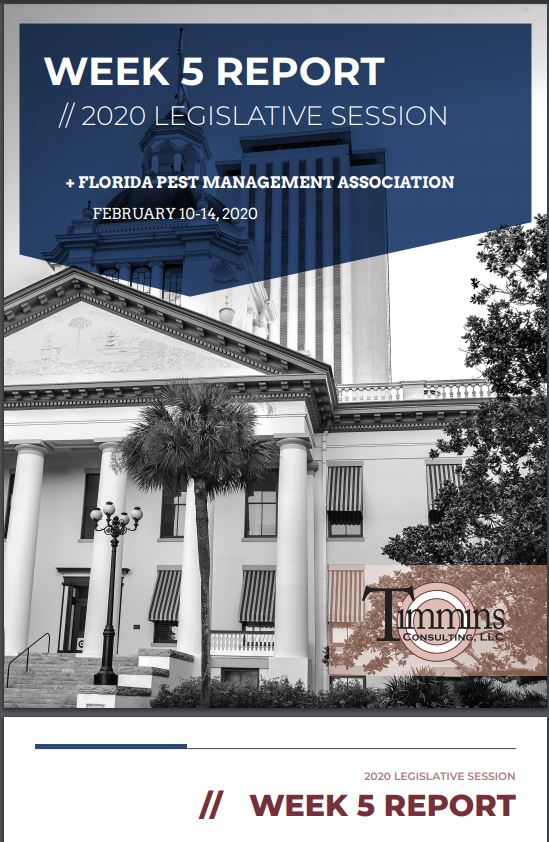 Love, friendship, networking — these are all critical connections and the foundation of a healthy, happy life. — Whitney Wolfe Herd